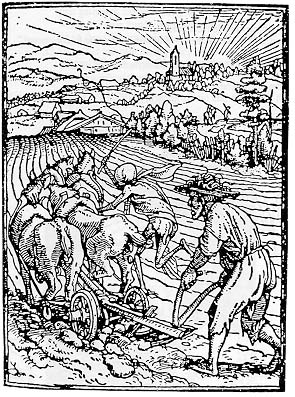 The predisposed to the well-disposed, the dedicated to the devoted, the companion to the compeer, Johannes von Tepl to Peter von Tepl, the burgher of Saaz to the burgher of , friendly and brotherly love.

Love, which united us men in blossoming youth, admonishes and compels me, in thinking of you, to offer words of consolation and dedicate to you that novelty which you have recently desired through von Z. from the field of edifying rhetoric, at which I, after missing the harvest, have gleaned some ears.  Consequently I proffer you this untended and rustic concoction, pieced together from German chatter, which comes fresh from the anvil.  Yet in it you will find, on account of the great matter undertaken, an attack on Death’s ineluctable destiny in which the essentials of rhetoric find expression.  Here a long subject is abridged, here a short one is protracted; herein is contained praise and reproach of things, even now and then of one and the same thing.  Here can be found clipped syntax, balanced expressions, equivocation together with sameness of sense.  Here is a stream of phrases, clauses, and periods in a novel style.  Here they act, now abiding at one locus, now in ranked progression.  Parable performs her duty, Declamation attacks and assuages, Irony smiles, and decorative words and sentences reign with the figures of speech of their office.  Furthermore, many other, and so to speak all, ingredients of the orator’s art that are possible in our inflexible language, even the untended ones, take effect here, as the observant reader will discover.  To conclude I shall refresh you with some of the Latin ears that jut in my unfruitful field.

Given under the authorisation of my seal on the Eve of blessed Bartholomew in the year 1428.

It was composed in Latin; I have translated from Genzler’s German rendition.  He does not supply the original.  The opening address relies on inflectional case endings: ‘Dem Geneigten der Geneigte, dem Ergebenen der Ergebene…’.  English having lost nearly all of its inflections, I sought to reproduce the effect through synonyms of similar sound.

Back to the Husbandman